It’s that time of year again! A time when young Meditators, Sidhas, and TM Teachers come together for a TM Together Weekend.

For those who don’t know, the TM Together weekend is a course for young Meditators, Sidhas, and TM Teachers. The goal is to deepen experiences of TM through cycles of yoga asanas and meditation in groups — also known as ’rounding’ — and to bring together young Meditators who live near each another.

The upcoming course in May will be MERU’s fourth TM Together weekend, and each one so far has been a very special experience.

But you don’t have to take my word for it. I spoke with one of our previous course participants, Katrin Boland, to hear what she had to say.

In the interview, Katrin speaks about how meditating in a group is different than meditating alone at home, what it was like to come to MERU for the first time, and why TM Together is such a powerful experience.

Rebekah: So Katrin, can you tell me a little bit about yourself? Where are you from and what do you do?

Katrin: I’m originally from Germany, but I’ve been living in the Netherlands now for almost a decade.

I work as a customer service representative in a company that sells vinyl rolls to companies to put on cars and on walls for advertising.

I’m taking the orders there, and answering customer questions on the phone and by email and on the website. It’s a nice international team and it’s nice to help other people, and for now I’m happy with that.

When did you learn TM?

It’s now two and a half years ago. I learned TM in the Netherlands in the Hague, where I’m living.

Did you do rounding courses before you came to MERU for this course?

Yeah, I did one rounding course before. That was in Lelystad, which is a Sidha village in the north of Holland. It was a long weekend, just like the TM together weekend, more or less.

Yeah, definitely. It’s a kind of connectedness with the people I’m meditating with. But all the deep rest and the effects that you normally sense when you meditate, they’re even deeper, strengthened.

How did you hear about the TM Together course at MERU and what made you decide to come?

I think I must have read it as an announcement in the Dutch TM Newsletter.

I was always the youngest participant.

I was wondering, ‘is this actually a kind of a hobby for older people? Is it something strange for my generation to do?’ I was always curious whether there were any other young people out there.

And when I read about the TM Together weekend, I was so curious. I thought, ‘I just have to go there because I want to meet those people my age doing TM as well!’ I was curious about what they’re like, if they’re ‘normal’ young people … I was just curious.

‘Is this actually a kind of a hobby for older people? Is it something strange for my generation to do?’ 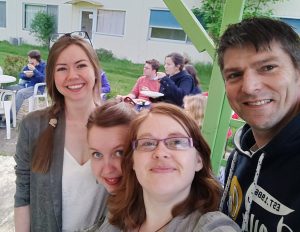 Was this your first time visiting MERU?

I had been once before. That was for an Open Day in 2016. And I was just walking around a bit on the campus and looking at all the booths.

But this was the first course that I participated in.

Sometimes at MERU we forget what it’s like for other people, ‘outsiders,’ to come to campus for the first time. Do you remember how you felt when you walked onto campus?

When you come from … let’s say from the ‘outside world,’ living in a normal city, having a normal job, it’s really like entering another world.

You immediately sense the peace and quiet there, it’s really nice. It’s very uplifting. You’re immediately in another world, like you’re on holiday, but even nicer than a normal holiday.

‘You’re immediately in another world, like you’re on holiday, but even nicer than a normal holiday.’

What were some of the highlights of the weekend?

The first highlight for sure was that we meditated in Maharishi’s home. For me it was the first time that I entered the house of Maharishi. You even have another atmosphere there, it’s more special, and then to meditate there was a great experience.

And then it was the group of people that I met there. That was really nice, to get to know them and to spend the time together and exchange our experiences with meditating and beyond.

Do you remember how you felt afterwards? Did you feel you were able to carry something with you after the course?

Yeah, I was very relaxed. It’s really like having been on a holiday. You feel deep rest.

But it was also the people that I met who were very inspiring for me … lots of new impressions. It was really affirming me in my own practice that I thought, ‘Oh this really is a great thing to do.’

It’s nice to see that you are connected with so many people around the world, that you are a part of a bigger community, a bigger movement.

Because sometimes when you meditate at home, you can have a period that’s not so easy, and you think ‘Is this really working, is this really doing something?’ Sometimes you get doubts, and so going to the group meditations is always reassuring.

‘Sometimes when you meditate at home, you can have a period that’s not so easy, and you think “Is this really working, is this really doing something?” Going to the group meditations is always reassuring.’

Afterwards you came back a couple times for some courses. What made you want to come back?

Yeah, that’s right. I spent such a great time there.

Of course, meditating and doing programme together is already such a nice thing to do.

But also the place, the campus, within nature. It’s a really peaceful place, and of course the people I got to know, to meet them again and spend time with them again, that made me come back.

Rebekah Mays is originally from Austin, Texas, and currently lives in the Netherlands. She is thrilled to be working as MERU’s Content Director, and her aim is to help make Maharishi’s vast knowledge more accessible to people from all countries, ages, and backgrounds.

Interested in the knowledge of consciousness? Stay up-to-date on courses, assemblies, and other opportunities at MERU with our monthly newsletter.

Meet the MERU staff heading to TTC this year

Yes, that TM Retreat is probably worth it.